Parts processing companies are continuing to grow with innovations accommodating the perspectives of customers and employees.

Published in May 2018, the "Manufacturing White Paper 2018" reports policies for the promotion of core manufacturing technologies.

Influenced by factors like the pace of technological innovation and rapidly changing customer and market needs, the manufacturing industry has been exposed to dynamic changes. To tackle this, the white paper suggests "strategies to maintain and strengthen factory capacity and cultivate digital skills" as well as "added value increases to accommodate new environmental changes."

Today we will be covering Tel-mic, Inc., a parts processing company established in 1995.

Having achieved rapid business growth in recent years, Tel-mic manufactures critical parts for a broad range of sectors including medical, automotive, and aerospace.

A pioneer in incorporating policies from the aforementioned “Manufacturing White Paper 2018,” Tel-mic has adapted well to the radical changes facing the industry by striving to bolster production and increase operational efficiency through full use of IoT.

We met with CEO Hidenori Tanaka, who kindly agreed to talk with us. While showing us around Tel-mic's head office in Kariya, he explained how he had come to implement IoT and the ways in which it had changed his company. 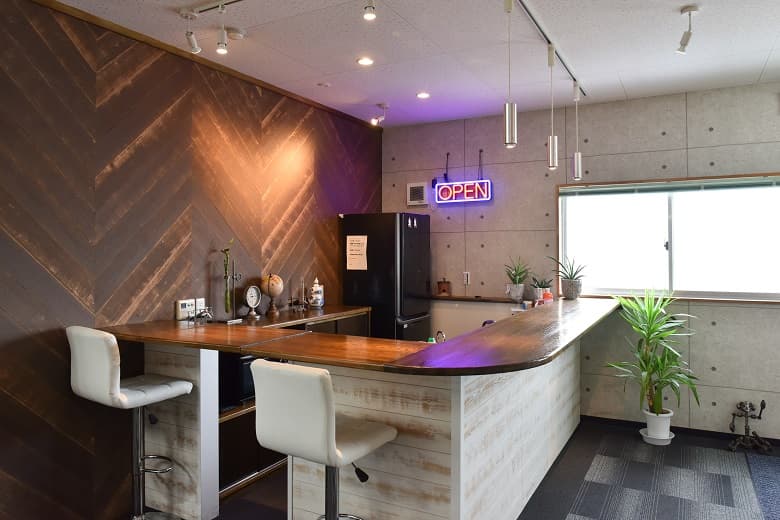 Tel-mic's office is a bright space, just like a cafe. Space has been left between each desk to ensure employees have enough room to be comfortable.

"The meeting rooms and reception areas are all divided by see–through glass. Information can be shared easily when a workplace is open, and this allows us to deal with problems before they get out of hand. Even meetings with our other offices are transmitted via large monitors in real time using Skype. We've improved business efficiency this way by eliminating the work of gathering employees in one place and printing and distributing materials as is normally done for meetings." 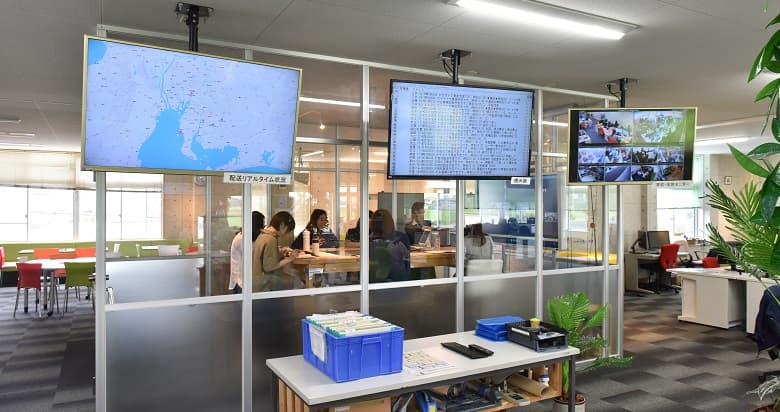 There are monitors mounted all over the office, so anyone can instantly check the information that's been collected. This enables employees to quickly respond to customer questions by checking estimates and progress reports at a glance. Monitors display the current locations of delivery vehicles via onscreen maps, enabling efficient collections and deliveries that can be tracked in real time.

While tracking delivery vehicles in real time may seem challenging, it is in fact very simple and cost effective, as the vehicle locations are tracked via the GPS functions on the drivers' cell phones. 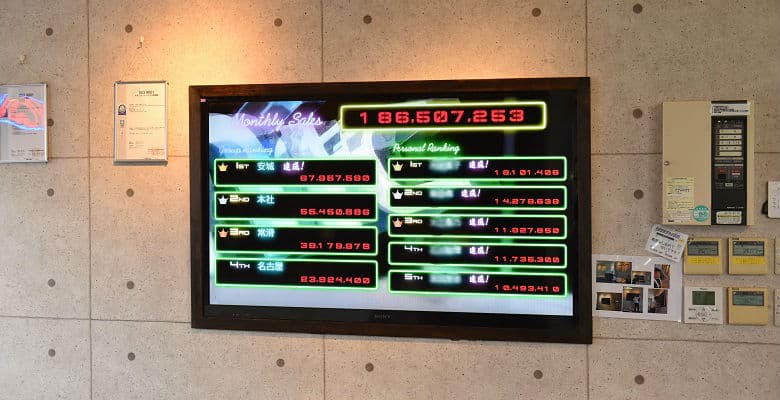 One notable feature is how each employee's sales results are displayed in a game-like manner.

When a deal is struck, the result is displayed on a casino style board. Employees can rejoice as they hit their targets or, naturally, be spurred on if they’re falling short. 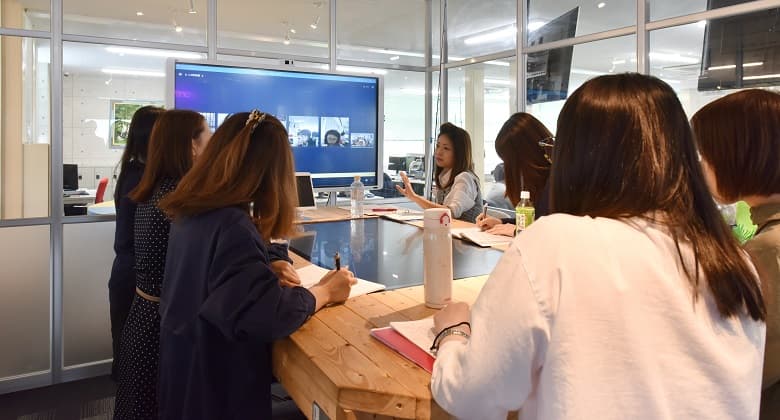 Another prominent feature of Tel-mic is their "stay inside" policy. If you look around their offices, you will notice there are many young female employees. This started when Tel-mic’s CEO questioned whether the more common business practice of having staff leave the office for sales was really in the best interests of customers.

"Firstly, leaving the office takes time. While away from your desk traveling or in a meeting, you can't reply to customer inquiries until you get back. This creates a big time lag, even though speed is important in the manufacturing industry. That's why I prefer to have my staff ready and able to take customer calls at any time."

Whenever the company is presented with an issue requiring a high level of technical knowledge, in–house engineers are consulted for a response. Tel-mic has accumulated data from tens of thousands of cases, all of which can be referenced immediately with an estimate dispatched to the customer within as little as 40 minutes. This is one reason for the increase in Tel-mic’s overall received orders.

Since its founding, Tel-mic has chiefly been involved in processing parts for the automotive industry.

"When the bulk of our sales were in the automotive industry, we were dependent on our partnerships with just a few companies. While those partnerships were stable, I realized that a new approach was needed, especially when considering the '2040 Problem.'"

The year 2040 is known as the time when electric cars will become thoroughly established around the world. This will render engine parts unnecessary, and trade is expected to decrease dramatically. This is why CEO Tanaka decided to double down on his policy of widening his small customer base.

To achieve this, it was urgent to secure a certain number of employees and to create systems to meet the needs of a select few customers. Tanaka's first challenge, however, was facing the harsh realities of recruiting staff in the manufacturing industry. 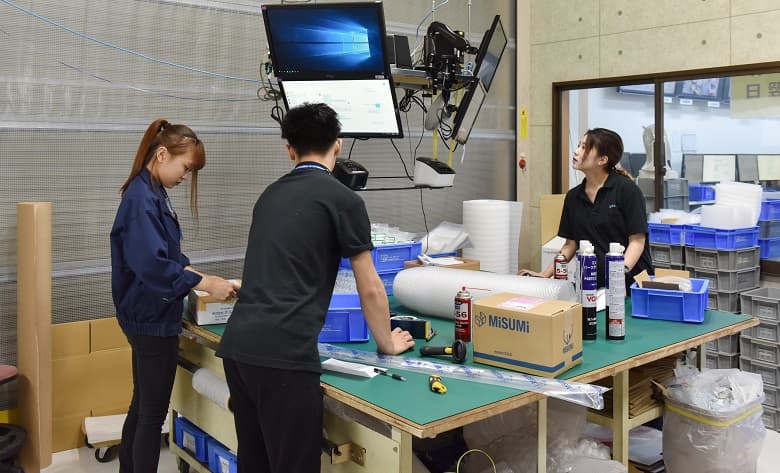 "I did feel we needed to change the unpleasant image of jobs in manufacturing, but if you look at young people and women today, most are seeking comfortable, fulfilling jobs with a good work–life balance rather than lifelong employment.

I was surprised by this at first, but it’s the young generation who will go on to support Japan in the future, so I decided to put aside my old assumptions and get with the times. Next, I formulated a plan that focused on getting young people motivated, and constructed a work environment where they could feel comfortable."

The result of this became the "transparency" strategy mentioned earlier, which Tanaka used to create a bright workplace with a wide variety of systems and initiatives in place.

An example of one such system is the “2+1 system,” in which two colleagues who are already good friends invite a colleague from another department out to an after–work dinner. Then, if they submit a report of just three lines, they will receive ¥1,500. This allows information to flow around the company in a less formal manner, while discouraging a culture of overtime and allowing employees to leave the office on time. Tanaka says that his future goals include further enhancing operational efficiency and reducing the work day to six hours.

As 80% of Tel-mic's employees are female, with 90% being under the age of 30, provisions for maternity and childcare leave are also important. The company offers a variety of alternative work arrangements for employees on maternity and childcare leave, including working from home. Creating an environment where women are happy to work improves the atmosphere for male employees too, encouraging them to work in a positive and forward–thinking manner.

So that employees can feel happy and accomplished at work in as short a time as possible, Tel-mic provides them with a manual that enables them to get an overall grasp on their jobs in three months, as well as biannual opportunities for promotion.

These various initiatives have born fruit. As of June 2018, Tel-mics number of employees has increased to 110 from just 30 five years ago. And this is not even a dramatic increase compared to the pace of the company's sales and business growth. Tanaka believes that strengthening human resources using IoT is of utmost importance.

Furthermore, his customer base has increased from just 4 companies to 2,500, and Tel-mic has made truly remarkable progress along the lines of its business policy. Tanaka is also on track to achieve a planned increase in sales from ¥2 billion to ¥3 billion within the current fiscal year.

CEO Tanaka, who has his sights set on overseas development to increase Tel-mic's customer base, once attended a five-day exhibition in Dubai. Though business talks only lasted a day, he sought to capitalize on his investment by using Alibaba to demonstrate his firm’s technological power and rapid responsiveness on a global platform.

This year, Tel-mic also established a new factory in Tokoname, Japan; a relay station in Shenzhen, China; and an organization for responding to customers in Chinese and English based out of their Nagoya office. 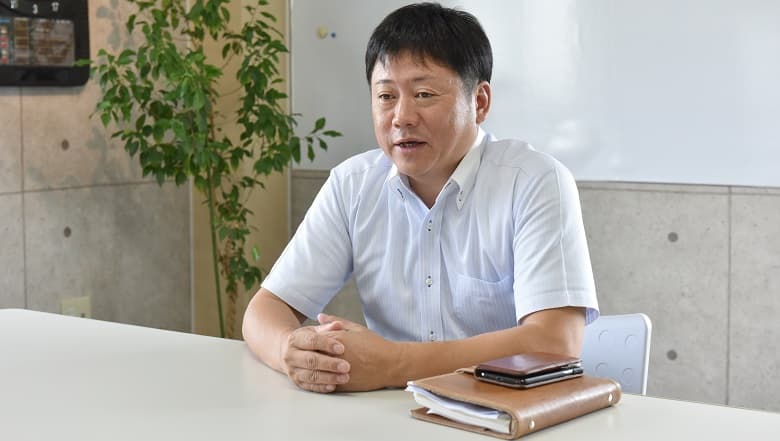 "Our strategies of transparency and stay-inside business using IoT have enabled us to develop a deep level of trust with our customer base through continuous responsiveness to their needs. Japan’s manufacturing industry has always had high costs and many hurdles to overseas development. But I think our values of high quality and reliability along with meticulous and responsive customer care are suitable weapons to fight with on the world stage.

Every object being used in the world is made by someone. As a professional parts processing firm, we want to support manufacturing on a global level."

With its customer base spreading overseas, the day Tel-mic will support manufacturing on a global level seems near. 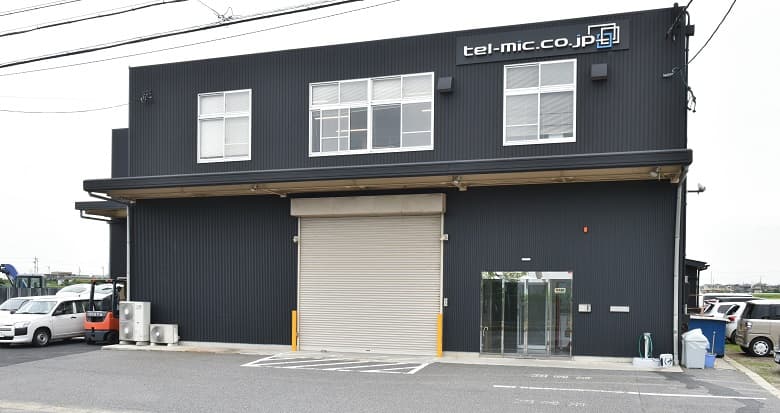 Tel-mic Co., Ltd was established in Kariya, Aichi Prefecture, Japan in 1995. We want to investment on the latest equipment and the office environment and want to take a lead in the field of the metal progressing industry.

We strive to earn the trust and make steady improvements.