Amazing the world with a Japanese sword that combines traditional craft with cutting edge technology.

The 5 regions of "Gokaden" were once renowned for the production of Japanese swords. In order to satisfy the demands created by warrior monks and the samurai in the capital, swordsmiths gathered in 3 places: Yamato (Nara), Yamashiro (Kyoto) and Soshu (Kanagawa).

Although far removed from the areas of consumption, Bizen (Okayama) was long known for its access to high-quality iron from Izumo.

Then there was Mino (Gifu) — Swordsmiths who had relocated from Yamato between the Nanbokucho and Muromachi periods were known as the "Sekikaji" and supplied a large number of swords to the Japanese market.

Today we would like to introduce "Seki Kanetsugu Cutlery Co.", a company that makes knives that have all the characteristics of a Sekiden Japanese sword in cutting well, whilst not breaking nor bending.

It is a knife company that was founded in 1918 by Matsujiro Kawamura, a descendant of the swordsmith, Kanetsugu.

While the impressive array of knives is overwhelming, one knife in particular shines more beautifully than the rest: "Zuiun", the knife that was made to commemorate the 100th anniversary of the company. "We spent about 2 years forging and creating this knife, which was to represent the culmination of craftsmanship that has sustained this company. We used the highest grade of Damascus steel, and paid extra attention to ensure it had the sharpness reminiscent of a Japanese sword. Care was also taken to give the blade pattern the appearance of flowing clouds. The unique pattern is also very popular with overseas customers. Soon after it was released, we received orders from cutlery shops in Israel and the Czech Republic, countries with whom we had never conducted business before". The above remarks were conveyed to us by Mr. Mitsuyasu Kawamura, the third-generation president of the company. Following our interview, I was given a tour of the factory floor where knives are produced every day. 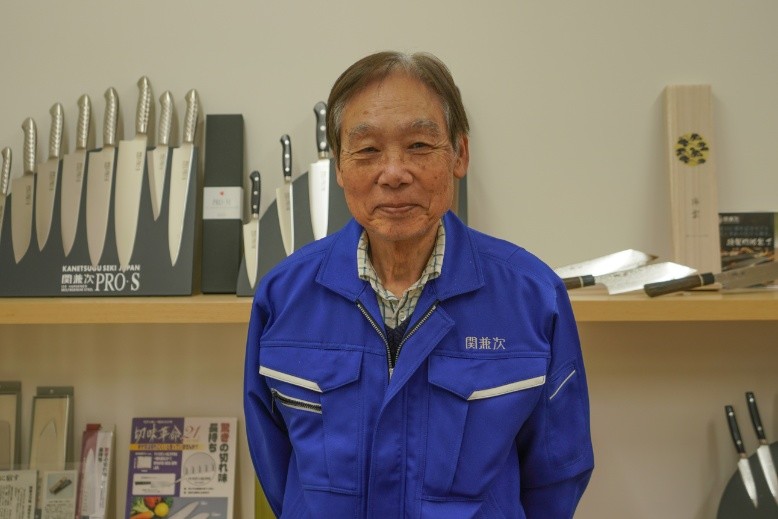 There are large machines on the factory floor, and steel is punched to form the shape of a knife, which is then polished. The machine to grind the blade is controlled by computer and has an accuracy of up to a hundredth of a millimeter. The precise welding for strength and the process of creating an even polish on the handles and welded parts are jobs done by machines.

Mr. Kawamura felt that in order to differentiate his company from others, it was necessary to have technical skills and the ability to adapt quickly. However, the traditions of craftsmanship are difficult and time-consuming. How could they inherit traditional skills and create products that meet the changing needs of our times? One solution to the problem was the mechanization of a part of the manufacturing process. 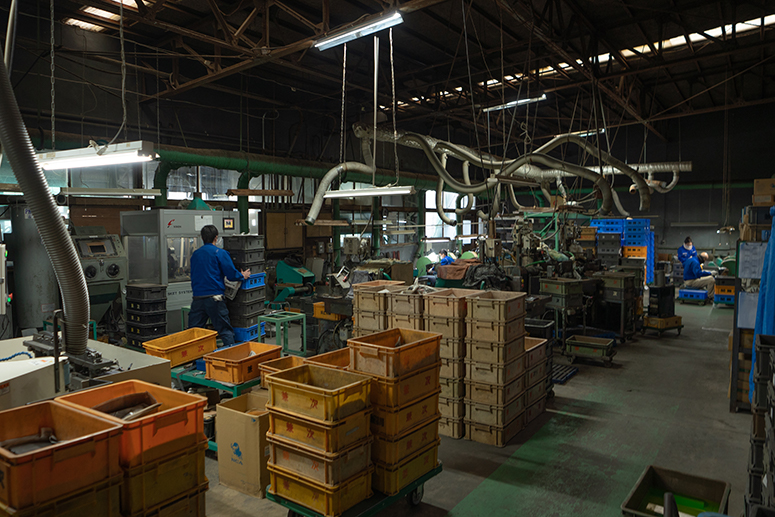 "We identified processes that we thought were more suited to machines, and when we actually performed the processes using machines and saw the results were superior, we considered it a success in passing down the technology through mechanization.

We invested freely on equipment and customized our equipment to make them easier to use."

However, there are many processes that require the skills of a craftsman to produce blades with characteristics rooted in the Japanese sword; for example, putting an edge on a knife to create a razor-sharp blade.

Apparently, by polishing the blade carefully on flowing water, the knife does not retain the heat and it prevents it from losing its hardness. The polishing of detailed sections of the knife is also done by the employees. By studying a variety of processing techniques, they aim to improve the skills of the entire company.

Looking around the factory, I realize that many of the employees working earnestly are young people. 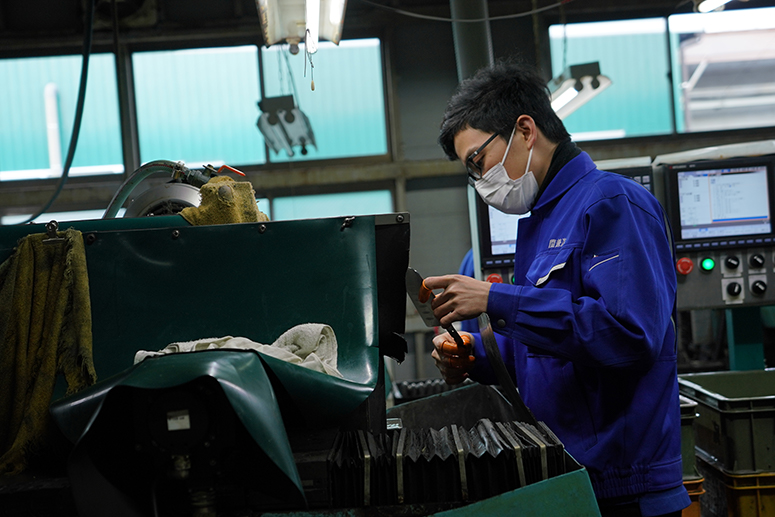 "I think the reason a local company rooted in traditional industries like ours can employ people in their 20's and 30's is because we have mechanized a part of our processes, as you saw earlier. Even without knowledge and experience, this is a job anyone can do as long as they are interested in knives and are motivated. In fact, our employees have worked in various fields before joining the company. We offer new opportunities for motivated young people who want to work in a community-based company".

Seki City, a city once known for the production of Japanese swords was transformed into the home of cutlery production, making use of its accumulated skills in producing edged tools.

After the war, the company supported the country's economic recovery by exporting cheap Western knives, but the turning point came in 1985; that year, the yen rose rapidly due to the Plaza Accord.

Seki Kanetsugu Cutlery, whose overseas sales accounted for 90% of their sales also suffered a major blow and was suddenly forced to develop a new market domestically.

"Export products were expected to be low-priced and mass-produced, but in the domestic market, quality is expected rather than low prices. What do Japanese customers want?... We had to develop products specifically for a market we had never considered before. In some years, domestic sales could not compensate for the decrease in the sales of exports, and our sales were halved. We also needed capital investment to create products for the domestic market, and we struggled for some time. Now, 90% of our sales are in Japan. Manufacturers who did not successfully meet the demands of the domestic market were forced out of business one after another."

Utilizing their ability to develop new products which they honed in order to survive, the company is also an OEM. 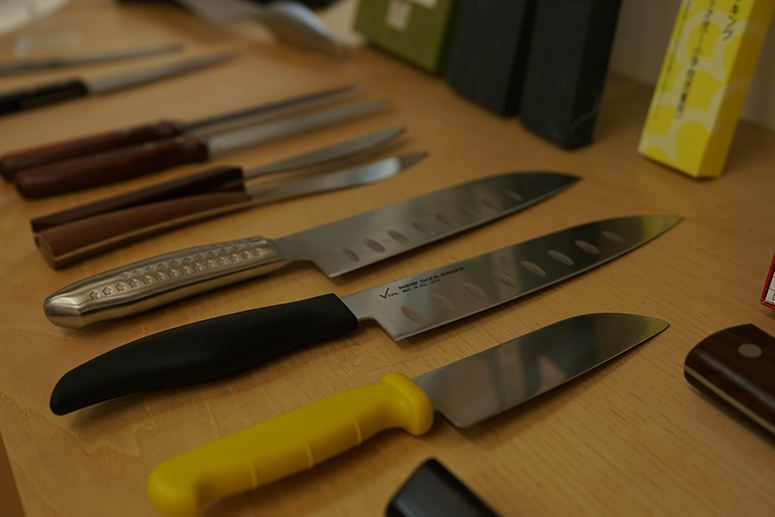 "Last year, we also produced products for an infomercial. I think easily cutting an avocado with the seed in it in the demonstration made an impact (laughs). Although it was only momentary, we received a lot of orders and we were operating at full capacity. When developing original products, we start with the idea that we 'want to make something that is unique'. Until now, I have been in charge of development right from the planning stage, but my employees have started to give me their opinions from a technical point of view, and that's something I feel is promising."

From high-grade knives that look like works of art to high-performance knives for everyday use: the products developed by the company were chosen for their ability to meet a wide range of needs.

The most significant characteristic of the company's knives is their exceptional sharpness.

The secret to their sharpness is in the shape of the edge of the knife, called hamaguri (clam).

If you look at the cross-section of the blade, you can see that it curves like a clam and tapers at the edge of the knife. This is the very shape of the Japanese sword, which possesses the sharpness and strength to cut through bone and armor. The company uses the same technology used to make Japanese swords in the production of their knives for everyday use. 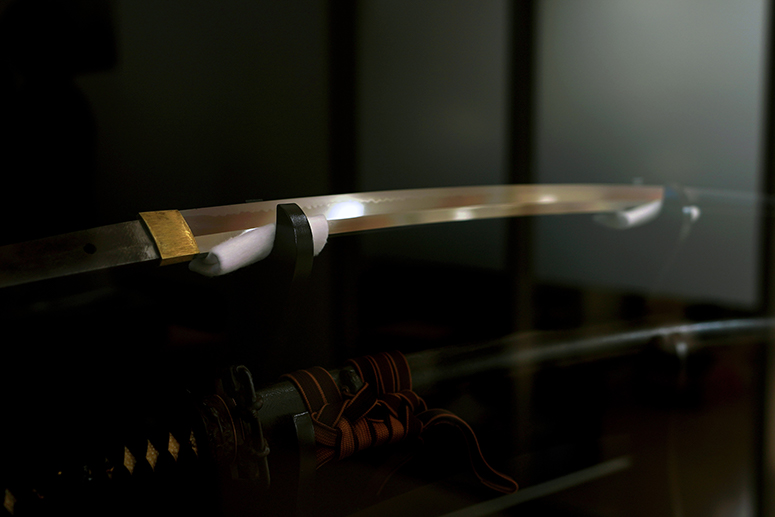 In addition, the production of Western knives for export has given them the experience needed to produce durable knives.

The process of carving fine grooves called "Micro-dents" into the edges of the knives increases the durability of the knives, making their sharpness semi-permanent.

The company has also developed cutlery with serrated edges.

These products are especially popular as gifts for Hometown Tax payments. 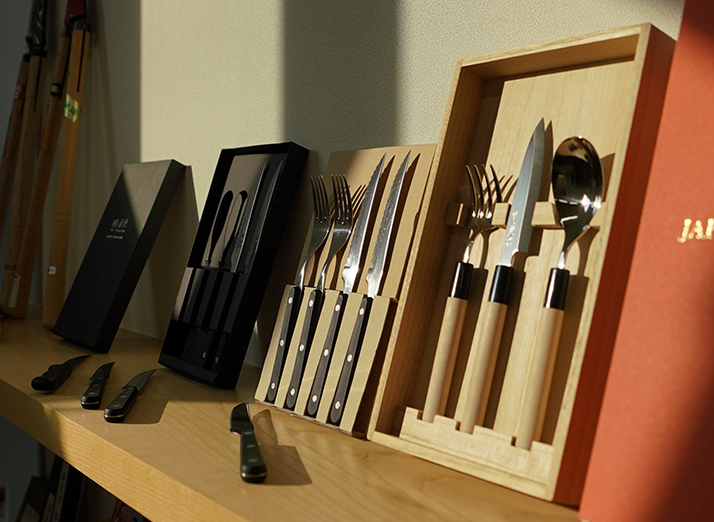 The company overcame a crisis by developing products aimed at the domestic market, and they continue to challenge themselves by entering new markets, in particular, the United States and Europe.

The company has been exhibiting at "Ambiente", an international trade fair of consumer goods for the last 13 years, and flew to Chicago to participate in an exhibition of household goods last year.

The reason for using Alibaba also comes from the company's desire to promote brand awareness and interest in their products.

"For us, the market that we need to break into in the future is the United States. However, we have only made sales through Japanese trading companies until now. We hope to build relationships with American businesses, even on a small scale, that we can trade with directly using Alibaba's network.

We also want to expand our business in China and Southeast Asia but there are many countries in those regions where eating out three times a day is the norm, so selling cutlery for the average household in those countries will require slow and steady effort."

Last year, the company participated for the first time in the bargain market at the local "Cutlery Festival". He says he was reluctant at first due to the shortage of labor, but when he approached the younger employees, they took an active role in the preparation. While it was only their first exhibition at the festival, they attracted attention and secured new clients from Finland, France, and Australia who were attending the festival. 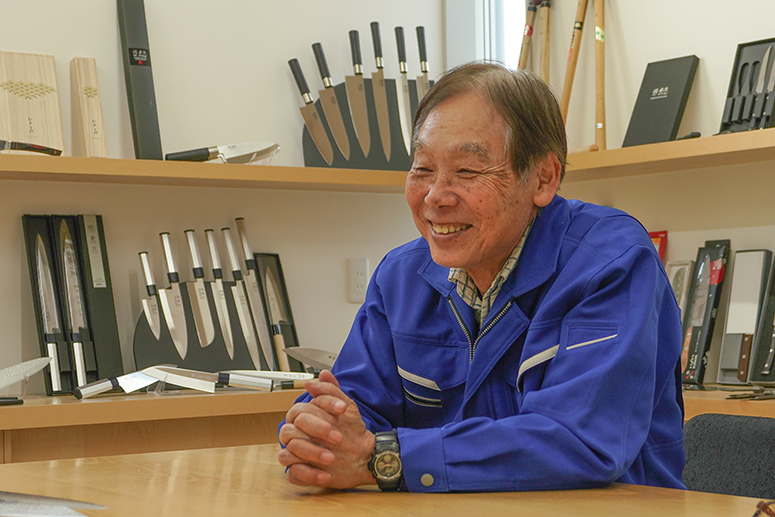 "When people actually try our knives, they are always surprised by how sharp they are. Everyone has used a kitchen knife or knife before, but the fact they are surprised by our knives only means that our knives have yet to reach those customers who feel that they 'want to use these knives every day'. We would like to gradually develop new markets with conviction, and deliver our cutlery to the world."

The company continues to approach potential customers through a variety of channels.

The challenge continues for Seki Kanetsugu Cutlery to bring amazement to kitchens and tables around the world. 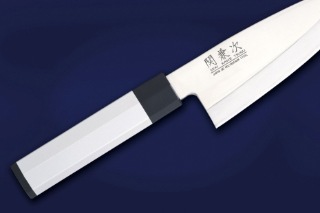 SEKI KANETSUGU CUTLERY CO LTD is the kitchen knife manufacturer established in 1918. Since Jowa era (1345-1349), the time of our founder Kanetsugu, we have passed the tradition of Japanese samurai sword down from generation to generation. Nowadays we bring this tradition to our kitchen knives, and are beloved not only in Japan but also throughout the world. Our knives are produced bringing the sharpness of Japanese samurai sword to modern chef knives by creating a collaboration of high technology and traditional skill. So we are proud that the amazing sharpness is the top of the world. We hope that our Seki Kanetsugu brand knives with long tradition will be reached to many people all over the world as the best use.