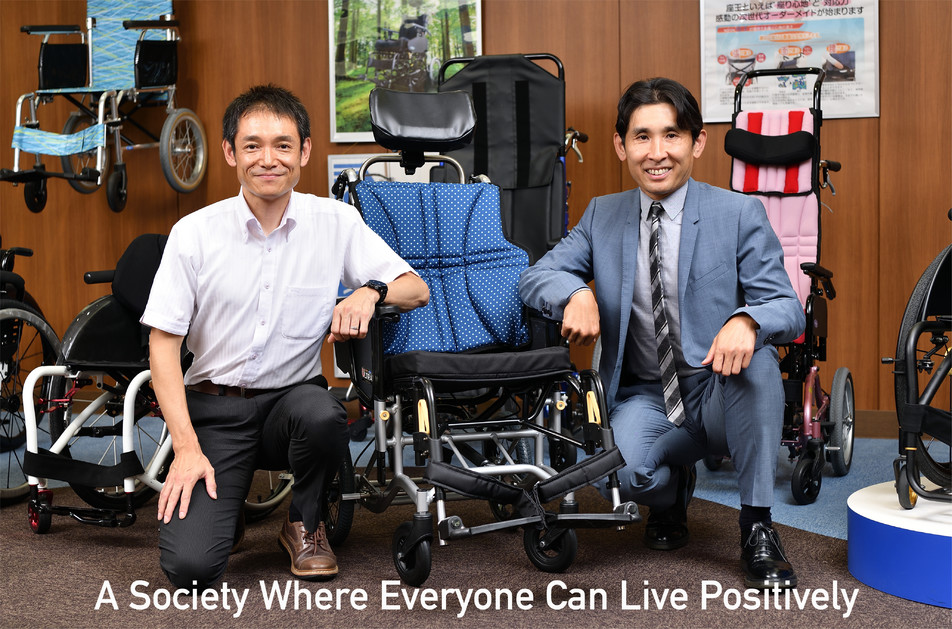 The goal is a society where everyone can live positively.

A society where it is equally easy for people of different abilities to live. With the Act for Eliminating Discrimination against Persons with Disabilities being enacted in 2016, prohibiting discrimination on the basis of disability and guaranteeing equal opportunity and treatment, the idea of a barrier free society has gained momentum over the last few years.

Today I’d like to introduce Nissin Medical Industries Co., LTD., a company that has made “ensuring all wheelchair users can lead spiritually fulfilling lives” their goal.  Since starting to manufacture wheelchairs in 1964 they have placed themselves at the forefront of the industry, setting a positive society for all as their goal.

Founded as an automobile components manufacturer, they began researching wheelchairs when their founder, and then president, was inspired by the athletes at the 1964 Tokyo Paralympics. Foreseeing an increased proliferation of wheelchairs in accordance with economic development, they imported popular models from Germany and Scandinavia and began their own trials.

Their diligent research continued, and they became a leading seller, manufacturer and designer of medical instruments, focusing principally on wheelchairs. Recently I had the chance to talk with President Keishi Matsunaga and head of overseas operations Mr. Satoshi Kameno about the company’s strengths and their thoughts on overseas expansion.

Nissin boasts a 60% share of the domestic order-made wheelchair market. In order to create wheelchairs with smooth movement and comfortable seating, you have to think not just about one person’s specific body, but the environment in which the wheelchair will be used, make precise measurements, and listen closely to user requests.

Currently, at retailers all over the country, staff will ask users about their own hopes and wishes, while also listening to their family, rehabilitation center, and doctors, and use all of their findings in their designs.

“Excluding cases where we’re talking about a temporary injury, we’re going to be working with our customers for a long time. We do listening-focused wheelchair improvements and repairs as well, and we get about 20-30 wheelchairs coming in to us a day from all over the country. Looking at that I’m really struck not only by how many customers we’re supporting, but how many come back to us for continued support.” (Mr. Kameno)

In addition to listening another great strength of the company is their particularness when it comes to materials and their high level of technology. They’ve specially developed a strong but light alloy in partnership with a materials maker. Their ability to bend and weld ultrathin 1.2mm - 1.8mm components has been recognized even by automakers.

The surprising lightness afforded by the materials is put to full effect in their designs, giving rise to a high level of synthesis, comfort and mobility. Because of this their wheelchairs are a top choice not just for normal everyday use but pro sports athletes who demand a high level of functionality.

“Sometimes our staff will go along to games with the athletes and check how the chairs are moving during the match. Seeing athletes using wheelchairs that have been created based on such close communications is a real source of encouragement for our staff. We’ve started to accelerate our efforts around the 2020 Tokyo Paralympics as well. It’s deeply moving to think of how the previous Tokyo Paralympics were the impetus for our company to get into this business, and this time we’ll be out their supporting the athletes ourselves.” (President Matsunaga)

Even while being the leading company in the wheelchair industry, “sit-skis” have raised their profile even further. Para-alpine skier Momoka Muraoka’s 5 medals at the 2018 Pyeongchang Paralympics are still fresh in everyone’s minds. But it wasn’t only Ms. Muraoka, depending on the event most of the athletes there were using Nissin’s sit-skis, and word of mouth apparently often spread among the competitors leading them to contact the company directly. 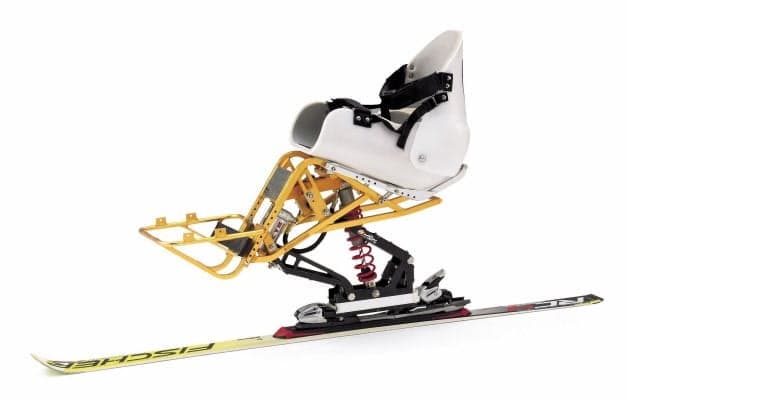 But just as with the wheelchairs when the company was founded, the design and manufacture of sit-skis was the product of some lengthy trial and error.

“Sit-skis don’t have any wheels, so at first it seems like they’d be completely out of our wheelhouse (laughs). But there was some rumbling about wanting to have Japanese-made sit-skis for the Nagano Olympics (1998). At the time we had our hands full with designing and making wheelchairs, but one of our technologists got really fired up about researching sit-skis. Because of that passion our company was able to break into a new field, and the experience we gained developing sit-skis has benefited our wheelchair development as well.” (President Matsunaga)

Nissin Medical Industries Co., LTD. began using Alibaba in June of 2015. Having established factories in China and America, they chose Alibaba in order to create opportunities for overseas expansion.

For wheelchairs the rate of proliferation correlates with economic and societal development, and they were able to foresee increasing demand in developing

overseas markets. However maintaining exhibitions and displays overseas can be difficult, so they decided to think of their Alibaba page as their exhibition site.

“Even so, for the first 3 months we had a lot of cases where we’d get an inquiry, but things would just shut down after the first reply.” With wheelchairs, even if you give someone all of the specs in hard numbers, the frame length or angle etc., without it right there in front of you it’s hard to get a real idea for the product. So we decided to use the page to communicate information that would let people visualize how and in what environments these products can be used, as well as concrete examples of our own domestic successes.

When we did that we started to get consults along the lines of “can you making something like this” or “I’m experiencing trouble in this type of situation, what should I do” and things like that. I was a little surprised at first because we weren’t really getting orders so much as requests for consultation and life advice, but listening to those sorts of requests is exactly the type of business we’ve been maintaining for many years domestically. It made me realize, oh, it’s going to be the same with the overseas markets too. I think people were probably pleased with how we were using their concerns and worries as the starting point for developing the product, and a lot of those consults ended up leading to orders. And I think our track-record domestically helped us gain people’s trust as well.” (Mr. Kameno)

Presently they’re receiving many orders from active users, and pro athletes in basketball, marathons, and sit-skiing. In a field where a high level of technology is required, it seems like they’ll have no problem competing overseas from a cost and value perspective. They also completed a retail sales agreement with an English corporation in 2017. Now they’re working hard to increase proliferation of sports wheelchairs, mainly focusing on racers.

From his experience in sales and marketing in China (Changzhou), Mr. Kameno feels the importance of customization for that particular market. The stance of taking the customer’s perspective won’t change in the overseas markets. They’re further classifying their products based on what sort of wheelchairs will likely be in demand based on regional differences in body types and societal infrastructure, and adding more arrangements.

Going forward they’d like to bring wheelchairs to the world that are suited for active users who get out and about daily and live independent lifestyles.

In closing, I asked President Matsunaga about his hopes for the future.

“Naturally we have to keep an eye on profitability, but I’m looking at our overseas expansion with a long view. I have the conviction that our wheelchairs will be accepted all over the world, that they’ll be wanted and needed, and that will keep me going. Now more than ever I want to support wheelchair users all over the world so they can live conveniently and comfortably, and the more products we can create for more situations, the better we’ll be able to contribute to a societal infrastructure where wheelchairs are just considered a natural part of things.

We started manufacturing wheelchairs in 1965, and introduced and offered to the market all the varieties of wheelchairs, stretchers, and welfare instruments, which have been accepted by the great number of people in the world.

We, Nissin Medical Industries Co., Ltd., maintain our “Passion To Attain the Foremost Convenience of the Users of our Products” and “Technology and Research and Development” based on our knowledge how accumulated over many years. We have endeavored to provide our customers with high quality wheelchairs which may offer “Highest Security to Our Customers” and may meet full satisfaction and trust of our customers.

We now have the trust of the customers as the No.1 manufacturer in the Japanese industry of wheelchairs. We will continue our endeavor and challenge in good faith to make our contribution to the society through technological innovations by providing our customers with such products as may meet their individual needs.