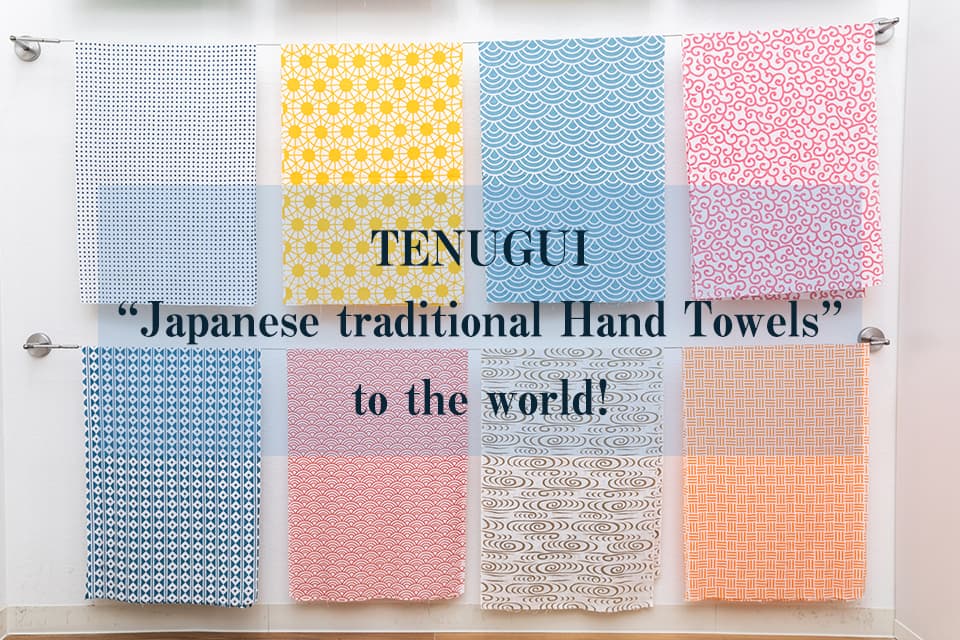 With an HQ located in Suita City, Osaka, KANNO ORIMONO CO., INC. is a long-established wholesaler of Tenugui (Japanese traditional Hand Towels) with a history going back 120 years. The store sells custom-made original Tenugui according to customer orders.

The company has established cooperative relationships with numerous dye factories throughout Japan, and their strength lies in being able to propose the optimal materials, production methods, delivery times and factories according to customer requests.
Due to speedy and careful responses to orders, the company enjoys the support of an extensive customer base and has produced over 15.5 million Tenugui.

In recent years, the company has worked on a wide variety of products from towels sold as merchandise at music concerts to towels for animation and video games to towels for Kendo (Japanese fencing).

In this article, we have asked the CEO Tetsuo Kanno and Director Yoshitake Tsuji about the company's strengths as well as the strategy for global expansion. 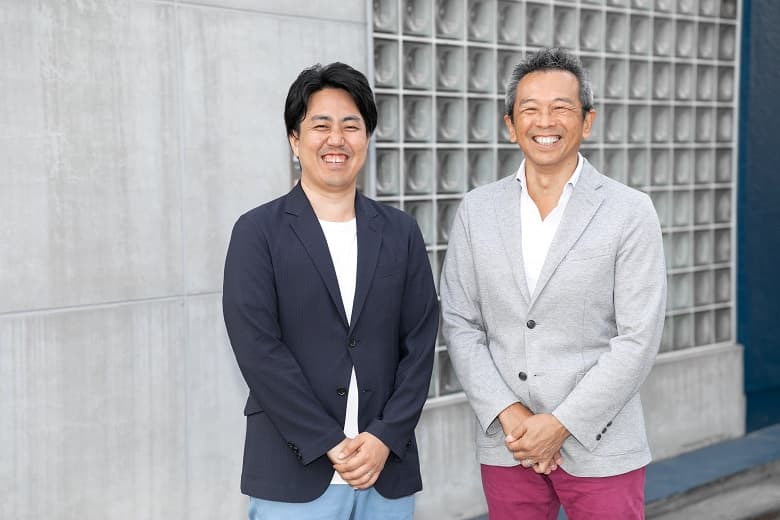 "Our company's current bestselling products are Tenugui and towels. We specialize in what we call "additional orders", which are Tenugui and towels with original designs. We can respond quickly to high variation, low-volume orders. In terms of sales ratio, towels account for 30% and Tenugui for the remaining 70% of volume. In recent years, the volume of original design Tenugui has increased." (Mr. Kanno)

Since KANNO ORIMONO CO. INC. does not own a factory, this enables them to make proposals without restrictions related to equipment capacity or specifications. They select the factory which is best suited to realize the customer's request from among over 100 cooperating factories across Japan.

When saying "factories", each company has actually good and bad points. Some of their competitors advertise as "factory direct" and appeal with their low prices, but it is difficult to own and maintain the production equipment required to satisfy the requests of all customers. In the case of selling factory direct, often customers' requests may need to be altered due or the company may be unable to accept an order because of restrictions in the factory equipment.

"I believe that the fact that we do not own a factory makes us the 'most convenient company' for our customers to order from.
All of our employees are very knowledgeable about our cooperating companies and even for difficult requests, they are able to give advice such as, 'we think this factory would be optimal for this type of dye.' The delivery time and quality are of course important, but we feel confident that we are way ahead of our competition because of the depth of our employees' knowledge, the number of our cooperating factories and our willingness to take on new challenges." (Mr. Kanno) While towels accounted for 90% of revenue from the 1950s to the 1980s, today, the product line up has changed significantly.

"Although the market for Tenugui is small, these were a niche product, so there were less competing firms than for towels. We changed our product mix in 2011." (Mr. Kanno)

In 2011, in order to receive orders for original Tenugui, the company opened a new website and approached school Kendo team and Kendo dojos (Kendo gyms) all across Japan by direct mail.

Kendo practitioners are the largest daily users of dyed Tenugui in Japan. Men and women alike wrap a Tenugui known as "mask Tenugui" or "mask towel" around their head before putting on the protective mask gear.

Bangs are wrapped so they are not in the way, and the Tenugui prevents sweat from running into the eyes. Because of its high water absorption, it is common to use a dyed Tenugui instead of a printed one. To increase the morale of the team, members of the same team or dojo will often create a "matching" Tenugui for all to wear together when preparing for tournaments.

The company focused on the demand for "matching" Tenugui and grew the revenue for these products.

"We were founded in 1899, and this year saw the 120th anniversary of our founding.

My great-grandfather started business as a sewing needle stall and established a trading company in Otaru-city, Hokkaido. The company established a branch office as a purchasing division in Osaka, the 'City of Textiles,' which turned into the roots of the current company 'KANNO ORIMONO'." (Mr. Kanno)

Osaka is called the "City of Textiles" and textile-related wholesalers are concentrated around the Senba area in Chuo-ku, Osaka. In the Meiji-era, the textile manufacturing industry and trading companies dealing with textiles grew significantly and companies such as Teijin, Toyobo, Itochu and Marubeni were born.

It is said that in Mr. Kanno's great-grandfather's day, textile goods purchased in Osaka were exported to Manchuria via Otaru. The Otaru head office went out of business during the Showa era depression, but the Osaka branch office changed its name to "KANNO ORIMONO" and continues operations to this day. 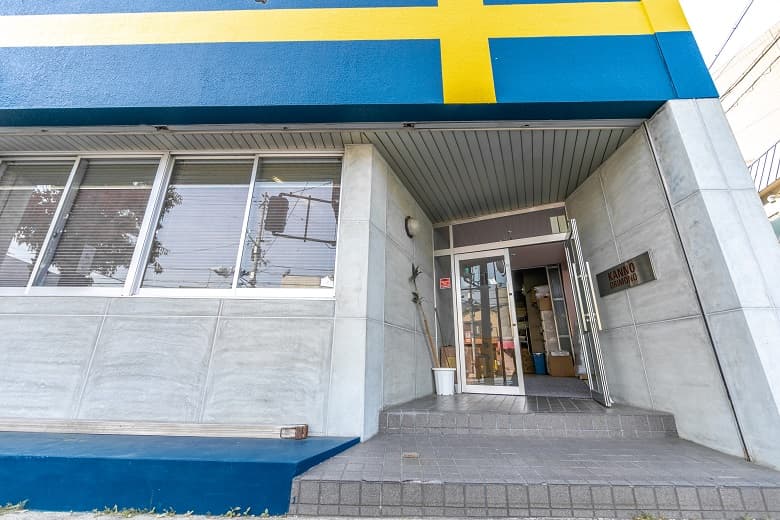 Although the company appears to have been on solid footing since Mr. Kanno took over the business, the company fell into distress twice in the past.

"About 10 years ago, some employees at the time quit the company, taking with them both large customers and suppliers. The impact was 200 million yen in terms of revenue, representing about half of the yearly revenue disappearing at once, and I even thought about going out of business once. I went as far as visiting the grave of my predecessor.

However, an employee who stayed with the company told me to 'please continue operations' and so that is what I did." (Mr. Kanno)

After that, one year later, the company was able to regain 150 of the 200 million yen revenue that had been lost. However, several years later, another dramatic breakaway drama occurred.

"The employee who had encouraged me to 'continue' last time broke away from the company, and took with him some good customers and suppliers and some other employees as well. I was in shock." (Mr. Kanno)

Mr. Kanno continues to talk about that big incident with a laugh. Apparently, the company was able to recover sales in about one year.

"Most of our customers came back to us saying 'we'd rather order from KANNO ORIMOTO than a company that's been in operation for less than a year'. This relationship of trust that we developed over many years with our customers and suppliers contributed to a rapid recovery in sales." (Mr. Tsuji)

The average employee age at KANNO ORIMONO is 38, and the director, Mr. Tsuji, is 35. The company has hired new graduates for two years in a row and is bursting with energy.

"You become more conservative as you age and unable to do new things. I will turn 60 this year, so I am gradually giving more authority to younger people now. Younger people understand that 'continuing to do the same thing is absolutely unacceptable' and try many different challenges." (Mr. Kanno)

The company has developed most of its customer base by orders via their website. In addition to establishing an EC site for both domestic and international customers, CEO Kanno himself updates as much as four videos a day and frequently sees to it that the website and SNS channels carry new information.

One of the company's initiatives realized through the website is an order for original hand Tenugui for the French Kendo Federation's Kendo tournament "The France Open (l'OPEN de FRANCE de KENDO)" as well as a shop launched during the event. The top page of the official tournament site prominently displayed the text "TENUGUI 2019".

An individual customer who placed an order through the website mentioned that he wanted to "visit the company when in Japan" and when he arrived, it turned out that the customer was in charge of PR for the French Kendo Federation. This chance opportunity led to a new deal.

"According to the forecast for the change in Japan's purchasing power, in 30 years’ time, domestic purchasing power will fall to half of the current level. We cannot continue with only domestic sales and have started to focus on overseas expansion. In 10 years’ time, we want to have increased the ratio of overseas sales to 50%." (Mr. Kanno)

"Since we started working with Alibaba, we have also started forming relationships with Chinese companies as suppliers. I feel that there are many good makers that can meet the demands of Japanese customers. We plan to work and grow with these companies. This month, we plan to participate in a product exhibition in Jiangsu Province." (Mr. Tsuji)

Since joining the company, Mr. Kanno has led the company with the desire to popularize Tenugui both within and outside of Japan.

With sparkling eyes, Mr. Kanno explained his plans for future expansion. "From now on, I want to sell not only single items, but define a new business model as a 'company that supports Kendo practitioners and sports players.' "

Supported by its passionate employees, KANNO ORIMONO CO., INC., is full of enthusiasm and willingness to take on new challenges. The day that the company will achieve their new business expansion is certainly not far off. Kanno Orimono Co., Inc. is a company with a long history, Founded in 1923 and established in 1958. We have been making Japanese Tenugui Towels, Furoshiki cloths, and towels for 91 years since our founding, and our quality is also recognized as that of a company accredited with an international standard.

Our corporate philosophy is to always exceed our customers' expectations, and we aim to create products are practical, being durable and highly absorbent, while also focusing on design.